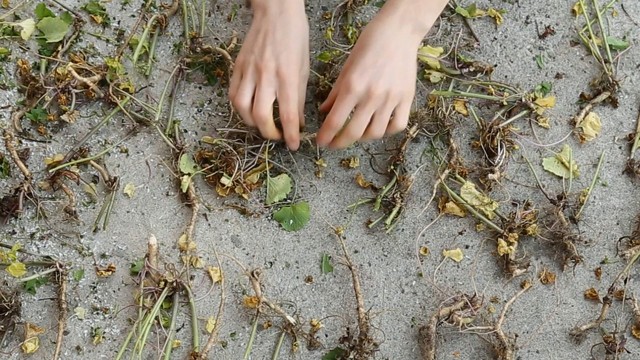 The inspiration for the video 'Vademecum’ was an old Jewish cemetery in a small town called Głogówek, in Poland. The town is linked to the history and culture of the Jews (who, according to the sources, lived in the city as early as in the fourteenth century). After numerous pogroms and expulsions, the Jewish community reconstructed in the seventeenth century. In the nineteenth century they received an area for cemetery outside the city, where the ruins of the tombstones have been preserved to this day.
I became interested in this place, but not because of its historical or cultural context, but rather because the cemetery, after so many years of disuse, appeared more like a neglected garden than a place of burial. In May, when I had the opportunity to be there for the first time, the place was buzzing – blooming flowers and young trees grew on the graves and hid the stone matzevas.

The work consists of the film in two parts and several objects – entomological showcases with a collection of roots, herbarium and dry leaves and flowers. The last part of the project, was created a few months later – this is a video recording of a meeting with a friend of Israel, which in this work has discovered a whole new meaning to me.

The last recording was done during a short meeting with my friends: Agnieszka, Irad (from Israel) and their little daughter – Alex. For several hours we talked about our work and ideas for life, making dinner and settling daily matters. Seeing my work entitled 'Vademecum’, Irad became interested in the roots, which I gathered for the project and which reminded him of the Hebrew letters. I decided to document our conversation.
At the same time, Agnieszka was searching for job, and we were taking care of little Alex while watching cartoons in Polish and Hebrew.