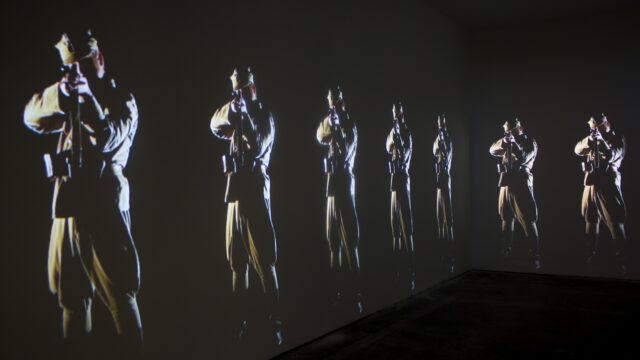 The death penalty is the highest level of punishment used by military courts for crimes such as cowardice, desertion, espionage, murder, rebellion or treason. For the military, the firing squad has a symbolic meaning. The punishment is administered by the group to emphasize that the convict is found guilty by the entire group.

The work was inspired by the execution scene from the movie 'Paths of glory’ by Stanley Kubrick. The film is set during World War I, however in our work this theme is used in a universal context. We use anonymous, faceless soldiers in order to create a situation in which the moment of execution is abstracted from any historical or national context. Instead, we concentrate on the phenomenon of a justified murder. The situation in which personal responsibility is difused and justified by the group action. The interest of the group becomes more important than the autonomy of the individual.

Our intention was to put contemporary viewer in the situation of the convict, to let him stand in front of the firing squad, to become the one individual facing the group. In our work the firing squad is repeating the commands on and on before the final 'fire’ command comes. The drill is looped, so the soldiers repeat the commands pointing the gun at the viewer in order to create the situation of a kind of cat and mouse game with the viewer.