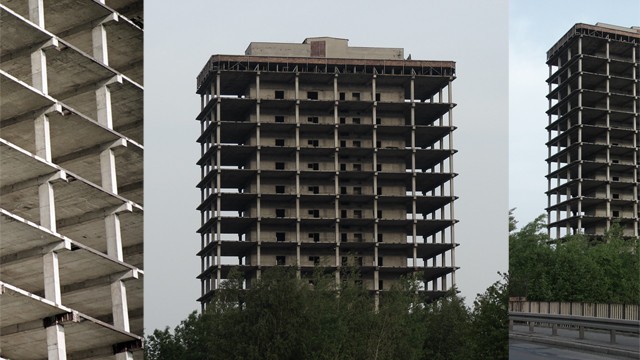 The campaign that was launched in Bielsko-Biała in 2007 was inspired by a building that was never completed yet intended to be one of the largest, most exclusive and modern buildings in the city. The building dates back to the early 1980s, when the FSM car factory in Bielsko-Biała arranged for the construction ofa twelve-storey office building. which was interrupteddue to insufficient financial resources.
As it appears to me, the building was part of a never fulfilled dream, a symbol of ambitious socialist plans, a testimony of time, and perhaps can be considered today as a monument. The main aim of the promotional campaign was to draw people’s attention to the fact that a derelict, unwanted and unfinished building has actually become one of the most recognizable city landmarks! This, in turn, was meant to provoke and facilitate a creative discussion onurban architecture and the perception and understandingof beauty. My billboard design resembles a road signinforming of monuments andtourist attractions. Postcards,stickers, t-shirts and a new website were also designed by me with the intention of them becoming the footprints of its existence.