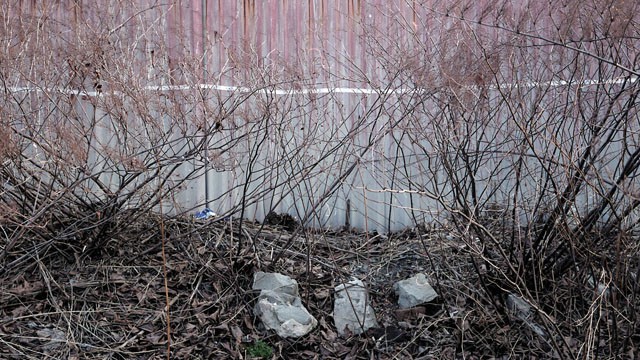 
The first stage of my work was a performative action, done in the industrial district of Czech city Ústí nad Labem called Předlice. I have spent one academic year (2011/12) on a scholarship at the Jan Evangelista Purkyně University, which is based in this city. Faculty of Art at this university opened a project called 'University Předlice’, which was directly dedicated to this industrial district. This is due to the fact, that this part of the city has been a kind of 'unwanted child’ of Ústí. Being in the past prosperous factory area, now is almost abandoned place, inhabited by a number of Roma people. The landscape is dominated by a complex of closed factories. It seems to be an empty, ghost town. Hardly ever people appear on the streets. Most of the buildings are demolished or in ruin. It reminds a maze with its endless walls, one similar to another.

Recalling the mythical story of a labirynth, I 'walked into’ this street maze, as I would be entering the unknown and dangerous place, which in fact it seemed to be for a stranger. For me it was an exploration field and every piece of wall, fence or asphalt was a medium to record the place. I did not try to meet people. Instead, I explored the place itself, I tried to mark as much places as possible using simple adhesive tape.

The performance is presented as a series of separate videos combined in multichannel projection. The background of the projection is created out of the transformed map of the Předlice district. Each of the individual films is looped and has its own duration and rythm. However, all of them represent the same action – I stick tape to the wall or peel it off. This simple and continous movement is constantly repeated. Videos last from one minute to several minutes.

The artefact of the street actions, is a simple ball created out of peeled off adhesive tape. It has 'collected’ the dust, rubbish, pieces of glass, small stones, sand and blades of grass. It is like fngerprinting of space. Therefore, I treated this object as it was a living organism. After finishing the action, I have visited the Museum of Anatomy, where I learned how to fix it in formaldehyde and I have prepared a kind of anatomical preparation.

The paper ball has become a material record of an abstract idea. Then I begun to 'search into’ this object. I used a traditional X-Ray to have a look into to the content of the ball. Next I made a CT scan of the object. As a result, the ball was actually resembling something like human body. Finally, I produced a video, which looped, would show a trance repetitive rythm.

The final part of the project is an interactive application, which uses a computer generated mazes. I have designed the basis of the labirynth using a map of Předlice, but transformed it according to the walks I have made in this district. Each user, can load a new 'game’, and each time the maze is different – the program generates a new maze by cutting selected streets. Taking into account the number of streets – there is an infnite number of possible solutions.